Start a Wiki
The Byzantine Empire was the eastern half of the Roman Empire, which survived, while the Western half had 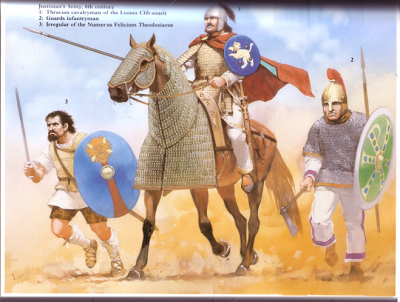 been destroyed by vandals.  The capital of the Byzantine Empire was Constantinople (named after Emperor Constantine) which is in Turkey.  Parts of modern day Algeria, Tunisia, Egypt, Jordan, Israel, Greece, Lebanon, Iraq, and many parts of Eastern Europe were part of the Byzantine Empire.  The Byzantines main religion was Catholicism and their main language was Latin, until the 7th Century, when they became Greek speaking.  Their most famous emperor was Justinian I, and like the Romans before them, they had chariot racing for entertainment.

Byzantine people
Add a photo to this gallery
Retrieved from "https://conquerors-rpg.fandom.com/wiki/Byzantines?oldid=6338"
Community content is available under CC-BY-SA unless otherwise noted.