Start a Wiki
Lucius Junius Brutus was the first consul and founder of the Roman republic, who heroically rebelled against 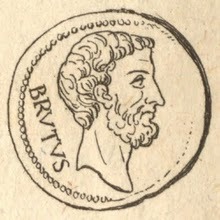 the tyrant, Tarquinn the Proud.  Tarquinn was actually the uncle of Brutus as well.  Brutus was the best friend of Collatinus, whom Tarquinn's son, Sextus, murdered.  He avenged the deaths of Collatinus and his wife, Lucretia, whom Sextus had raped and indirectly killed.  Brutus was killed at the Battle of Silva Arsia, in the civil war against Tarquinn, when he and Arruns, Tarquinn's other son, both ran each other through on horseback.  Brutus was succeeded by two consuls, Spurius Lucretius Tricipitinus (father of Lucretia) and Publius Valerius Publicola.
Retrieved from "https://conquerors-rpg.fandom.com/wiki/Lucius_Junius_Brutus?oldid=6261"
Community content is available under CC-BY-SA unless otherwise noted.