The Pontians spoke the Ionic Greek and Pontic Greek languages.  The Pontians supposedly followed the ancient Greek pagan religion but with different names for the gods, like many other Hellenistic cultures like the Macedonians and Romans.  IMPORTANT NOTE: During our current time period (509 BC) Pontus was not a kingdom, the kingdom of Pontus was founded in the time of Alexander the Great. Pontus was part of the Persian Empire in this time.  Alexander was in the 3rd Century BC so this is around 200 years later than our time period.  But not all Pontians were Persian in our current time (the wiki's time period), there were also Greeks.  Before Persia had conquered it, Pontus had been colonized by ancient Greeks. 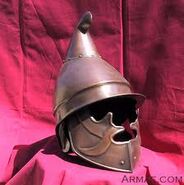 Pontian helm
Add a photo to this gallery
Retrieved from "https://conquerors-rpg.fandom.com/wiki/Pontians?oldid=6198"
Community content is available under CC-BY-SA unless otherwise noted.