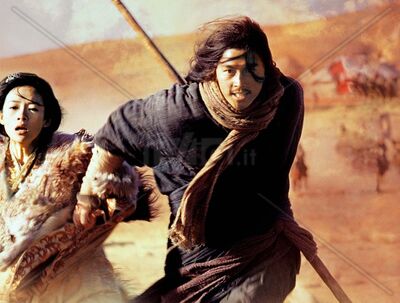 History - Earlier Life, The Foundation of the Scoula'Tev, and his Legacy

Rechaui was the founding father of the Scoula'Tev Tribe which originally started out as a underlying Dynasty within the Zhou.

Rechaui grew up in a life a massive Zhou family, however his was part of another family within the Zhou. He was taught under the most adept schoolars in Chinese Martial Arts and trained in multiple weapons scenarios. His favorite weapon was a spear tipped staff. As he grew older he eventually joined the Zhou in conquering other dynasties of China. He was known for his expertise with reconnaissance and close range combat skill with his staff. Accomidate and rewarded to the highest degree. "All of those 30 plus years in war... I guess she finally needed a touch up." - Rechaui commenting on his staff.

After serving his time within the Zhou Dynasty and seeing that China would become more secure, Rechaui retired but decided to take a alternate route in his leadership roles -- Thus he created a small tribal company with in the Zhou -- The Scoula'Tev. Originally the Scoula'Tev were only 5 people mostly those that had seen over 50 years in military experience. Rechaui being the youngest and the founder sought out recruitment. One day Rechaui had an idea, he went to the Zhou palance where a one of three princesses were being crowned for the thrown. The idea was to "take" Princess Celesestsu. He wanted to marry her and she also was in love with him, however they couldn't see each other due to a political whirlpool of problems. So it was a stage attack-kidnapping. Eventually after they had founded a good enough body double that looked like she had "died" the two secretly married each other and had a son. This is how the Scoula'Tev Tribe was passed down. Yumaoui being the 8th generation to take leader ship of the tribe. Eventually this lead to having their own region in China after Zhou disappeared. Out of all the other tribes that had existed, Scoula'Tav had a detached defficiency. It could contain it's members but could never control them. Rechaui and Celesetsu wanted order so they created a 'House' government or an early stage parliment where three and only three houses had control, and the main house. House Scoula'Tev had full controll over the others. And thus House Scoula'Tev became the thing in history.