The Romano-British were the result of Romans conquering Britain, during the reign of Emperor Claudius.  They

continued to exist even after the fall of the Western Roman Empire.  The legend of King Arthur is set during Romano-British times, in fact, King Arthur is based off of two Romano-British kings.  The kings that inspired King Arthur's legend were Riothamus and Ambrosius Aurelianus (who is actually King Arthur's uncle in one draft of the story, but, the real life Ambrosius Aurelianus wielded a very strong longsword, which may have inspired Excalibur).   Romano-British society flourished especially in Southern Britain, after the Western Roman Empire's fall. Mordred of King Arthur legend, is actually based on Arvandus, who betrayed Riothamus to the Visigoths. 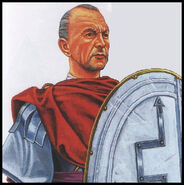